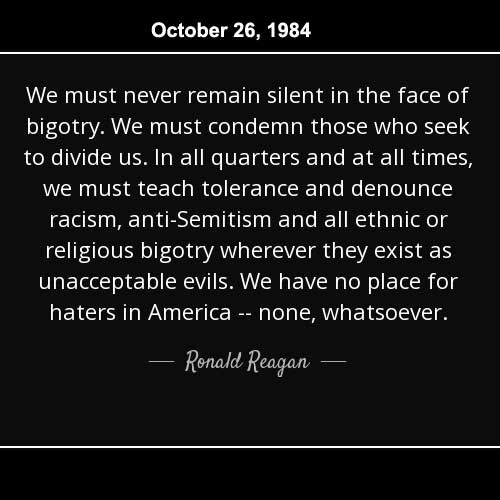 Reagan’s “Tear Down This Wall” speech was a defining moment of his presidency. To Reagan, the wall separating East and West Berlin was a scar on the land that brutally divided a content, and its very existence questioned the freedom of all mankind.

Reagan understood that the wall was not just a symbol of Soviet Union oppression, but a practical tool of tyranny. He called the wall, “An instrument to impose upon ordinary men and women the will of a totalitarian state.”

The speech also reaffirmed America’s role as the world’s shining light for freedom. Reagan defined freedom in both economic and social terms. In doing so, he inseparably fused the freedom that our press must enjoy to the economic freedoms he championed of lower taxes and less government regulations.

“Just as truth can flourish only when the journalist is given freedom of speech, so prosperity can come about only when the farmer and businessman enjoy economic freedom. The German leaders reduced tariffs, expanded free trade, lowered taxes. From 1950 to 1960 alone, the standard of living in West Germany and Berlin doubled.”

Reagan also trumpeted the success of the Marshall Plan which helped rebuild a wore torn Europe. Through the US’s charity freedom blossomed from the ruins of war, and we became a stronger nation for it. For Reagan, the Marshall Plan was proof America was truly the Shining City on the Hill.

“The Marshall Plan is helping here to strengthen the free world,” Reagan exclaimed. “In this season of spring in 1945, the people of Berlin emerged from their air-raid shelters to find devastation. Thousands of miles away, the people of the United States reached out to help. And in 1947 Secretary of State—as you’ve been told—George Marshall announced the creation of what would become known as the Marshall Plan. Speaking precisely 40 years ago this month, he said: ‘Our policy is directed not against any country or doctrine, but against hunger, poverty, desperation, and chaos.'”

Holding the success of West Berlin up as an example, Reagan was hopeful that Soviets themselves were on the verge of understanding the importance of freedom. There were signs reform was emerging from Moscow and Reagan used access to the media as an example. “Certain foreign news broadcasts are no longer being jammed,” Reagan explained. “Some economic enterprises have been permitted to operate with greater freedom from state control.”

Reagan, however, warned that these may not be lasting changes, but merely “token gestures intended to raise false hope in the West.”

Reagan indeed hoped the reform represented a new spring that would bring freedoms to the East. “We welcome change and openness,” Reagan said. “For we believe that freedom and security go together, that the advance of human liberty can only strengthen the cause of world peace.”

From his words, freedom blossomed. For words have power. Two short years later the Berlin Wall came crumbling down, torn into bits by the those that stood up and claimed their freedom.

Thirty years have passed. We now seem nearly as far away from Reagan’s words and he was from the Marshall Plan he spoke of. America has a new president in Donald J. Trump, but it does not appear that the Shining City on the Hill is entering a new spring.

Reagan’s words affected positive change through the vehicle of eloquent language and well-crafted ideals that encouraged peace and freedom. Trump frequently uses crass language and attacks all those that dare to disagree with him.

Reagan was unapologetic that America stands for freedom and the Soviets represented the manifestation of evil that can only thrive in a totalitarian state. Trump asked for and apparently received assistance from the Russians in getting elected with a minority vote.

Reagan embraced the press as the instrument of a free people to expose truth. Trump has declared that he is in a war with the media.

Reagan embraced that a compassionate America encourages peace and prosperity throughout the world. Trump promises to make the best deal possible.

Reagan sought to tear down a wall, so that freedom and prosperity could emerge. Trump promises to brutally divide our continent with a wall that will scar our land, and breed hunger, poverty, as well as desperation for our neighbors to the south.

On that spring day, thirty years ago, Reagan clearly stood on the side of the wall that represented freedom!

Trump stands on the other side of the wall. 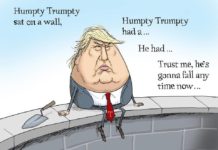 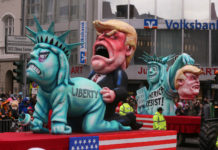